Book a tour and more to the Snæfelssnes west peninsula

If you have extra two days I can recommend a tour to the west land and Snæfellsnes peninsula. There are many interested landscape to see together with all those small villages. Read more about it on https://www.west.is/

don't miss out a visit to the Vatnshellir cave. The small old fishing town Arnarstapi and close by Hellnar. 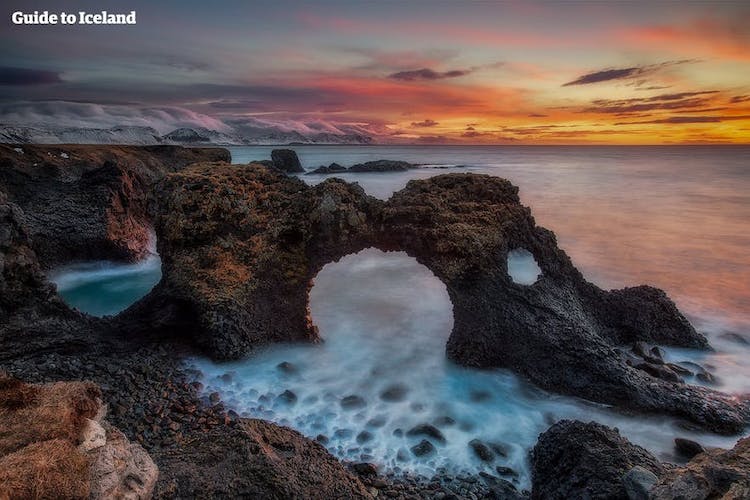 Snæfellsnes is a large peninsula extending from West Iceland, often nicknamed ‘Iceland in Miniature’ due to the wealth and diversity of natural features found there.

Home to the Snæfellsjökull National Park, at the centre of which is a subglacial volcano that towers over the scenery, this peninsula is home to waterfalls, rock formations, beautiful beaches, historic villages, and intricate folklore.

In particularly clear weather, the Snæfellsnes Peninsula can sometimes be seen from Reykjavík, making views across the water from the capital of Iceland particularly beautiful. Those with an extended stay in Iceland are recommended to look into spending at least a day here. 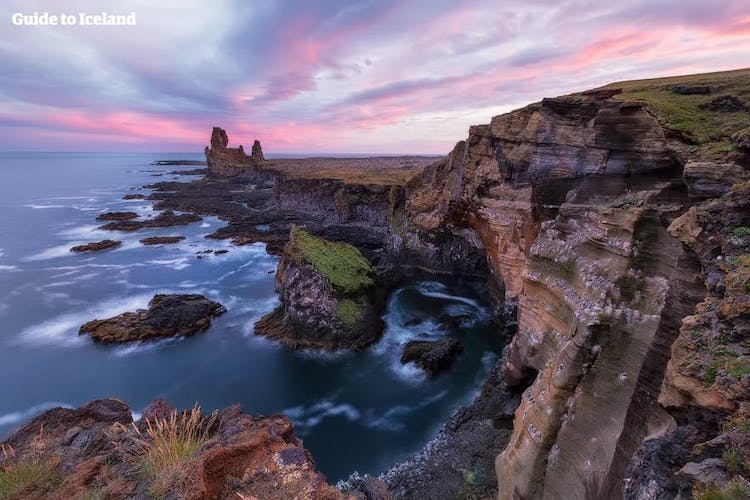 The peninsula stretches 90 kilometres (56 miles) from West Iceland, between the Reykjanes Peninsula to the south and Westfjords to the north. A mountain range runs along with it, consisting of both active and dormant volcanoes, culminating at the magnificent, ice-capped Snæfellsjökull volcano.

Starting along the south side of the Snæfellsnes Peninsula, you will first come to the Eldborg crater, which can be scaled for some incredible views, and the Gerðuberg basalt cliffs, where hundreds of hexagonal basalt columns are arranged with geometric precision. You will then start hugging the coast, where animal-lovers can find the Ytri-Tunga beach and its year-round seal colony.

The next site of particular natural beauty is the Rauðfeldsgjá Gorge, a cleft in a huge cliff face that it is possible to climb into. A stream runs through here, so those who want to plumb its depths will get wet. Those with decent clothing, sturdy shoes and reasonable fitness, however, will be able to get quite far.

After Rauðfeldsgjá, you will come to the mighty basalt plugs of Lóndrangar. All that remains of what was once a massive crater, these two enormous pillars are not only awe-inspiring in their scale, but home to thousands of nesting seabirds.

You will then enter Snæfellsjökull National Park, which, in spite of being the smallest of the country’s three national parks, is pregnant with destinations worth visiting.

The most historic of these is Djúpalónssandur beach. Comprised of black, volcanic sands, it is best known for the four lifting stones that remain on the beach from a bygone age. Fishermen would use these stones to mark their strength and gage their suitability to working on the dangerous waves.

Within the National Park are also two lava caves that can be entered in summer. Sönghellir is renowned for the musical qualities of its echoes, whereas Vatnshellir is favoured for its easy access and vivid colouration. There is a small entry fee to the latter, and you cannot enter it without a guide.

Of course, however, the highlight of this part of the Peninsula is no doubt Snæfellsjökull itself. Even if you are not ascending it on a glacier hiking tour, it is worth stopping by to marvel at.

This is particularly the case for literature enthusiasts. The adventure in the Jules Verne novel ‘A Journey to the Centre of the Earth’ begins here, and it is the backdrop to the lesser-known novel ‘Under the Glacier’, by Nobel-Prize winning Icelander, Halldór Laxness.

On the north side of the peninsula is the haunting Berserkjahraun lava field, near the town of Bjarnarhöfn, the history of which weaves deception and murder. Most notable on this stretch, however, is the mountain Kirkjufell, often described as the most photographed mountain in Iceland, and known as "the mountain shaped like an arrowhead" from the popular HBO series, Game of Thrones. 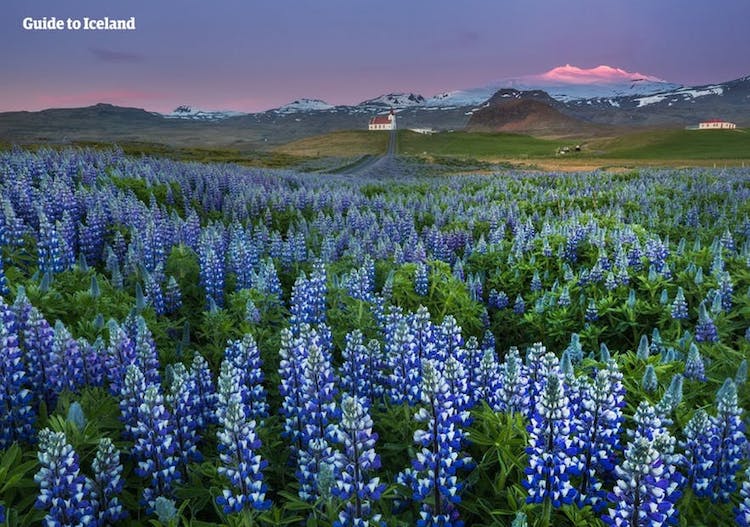 There are a few small and beautiful villages dotted across the peninsula, the majority of which are on the northern side, where the fishing is better. Most notable are Arnarstapi, Hellnar, Búðir, Hellissandur, Ólafsvík, Grundarfjörður and Stykkishólmur.

The last of these is highly popular for travellers, featuring a volcano museum and a ferry that takes you across the fascinating Breiðafjörður bay to the south border of the Westfjords with a stop at the remote island of Flatey.

Other museums of note are the Maritime Museum at Hellissandur, the regional museum at Ólafsvík, and, last but not least, the shark museum at Bjarnarhöfn, where you can taste the Icelandic ‘delicacy’, hákarl, or fermented shark.