One day trip - must thing.

Normally a 5 hour tour if going from Reykjavik and back.

No problem to drive your self but also possible to take the bus or private tour if you are in our penthouse, one of the pickup location is just here by the Hallgrímskirkja church few steps a way

When you do the Golden Circle I recommend you start by going through the National Park Thingvellir (Þingvellir) and stop by Almannagjá which is a gorge which marks the edge of the North American tectonic plate. Þingvellir is where the oldest parliament was found http://www.thingvellir.is/english.aspxand

After Þingvellir then head to Geysir and Gullfoss (Waterfall). After Gullfoss it is popular to go to Fridheimar (Reykholt) on the way back, theirs tomato soup is delicious also a horse show there if you are interested http://fridheimar.is/en

Before heading further you might want to relax in the Secret Lagoon https://secretlagoon.is/

Next stop before heading back to Reykjavik is Kerið a volcanic crater lake. Maps

p.s. If you are taking this trip from our cottage you take it the other way around

The Golden Circle is a 300 kilometre (186 mile) route to the three most popular natural attractions in Iceland: the Geysir Geothermal Area, Gullfoss Waterfall and Þingvellir National Park.

This sightseeing trail is easy to do within half a day from Reykjavík, either by self-drive or on one of many tours. Some of these tours have additional activities, such as snorkelling or snowmobiling, or are conducted in a unique style, such as by helicopter, or under the midnight sun.

Within the three locations of the Golden Circle are some of the clearest examples of Iceland’s fascinating geological forces, magnificent landscapes, and rich culture. 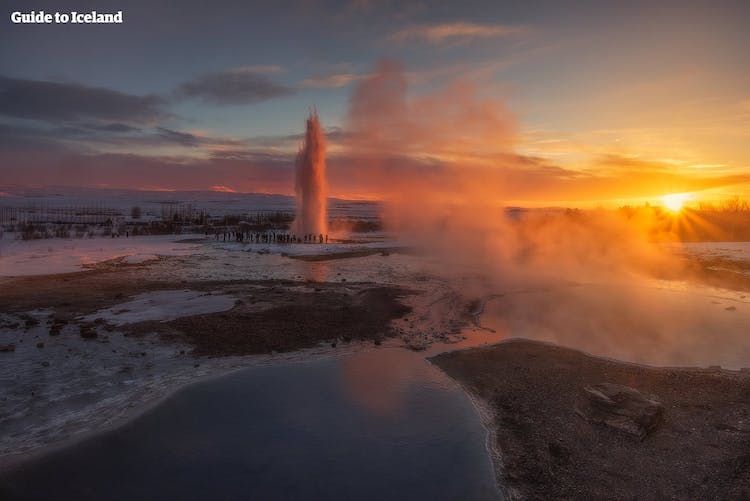 The Geysir Geothermal Area is a hot-spring haven in Haukadalur Valley. As could be guessed, it is home to a famous geyser, the name of which has named all others: Geysir itself.

Though this feature is currently in a phase of inactivity, its neighbour Strokkur more than makes up for it. Every five to ten minutes, it blasts a column of boiling water to heights that can reach over 40 metres (131 feet).

The surrounding area is dotted with fumaroles, hot springs, and mud-pits. There are also two other smaller geysers, Smiður and Litlí-Strokkur, that can be easily visited, as well as a hotel, restaurant, cafe and gift shop across the road. 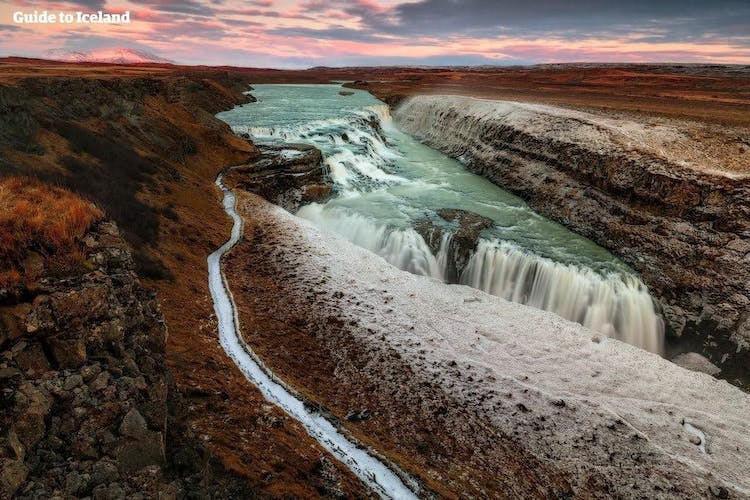 The 'Golden Waterfall', Gullfoss one of the most beautiful and powerful waterfalls in Iceland, plummeting 32 metres (105 feet) in two tiers into the river gorge of the popular rafting river Hvítá. It is just a ten-minute drive from Geysir and is the furthest point on the Golden Circle from Reykjavík.

Gullfoss was very almost lost in the early 20th century when British developers sought to harness its incredible power for geothermal energy. Though they got the lease to the land, allowing them to go ahead with their plans, they met an unlikely adversary: the daughter of the farmer who owned it, Sigríður Tómasdóttir.

This resilient woman refused to see the waterfall, to which she and her sisters paved the first path, destroyed. She, therefore, walked over 200 kilometres (124 miles) to Reykjavík and back multiple times to meet with a lawyer in order to help change the decision.

Though the process was arduous and took years, eventually Sigríður managed to exhaust the resources of the businessmen and they withdrew their plans. Because of her, all Icelandic waterfalls are now protected from foreign investors, and she is considered one of Iceland’s first environmentalists and most important historical people. 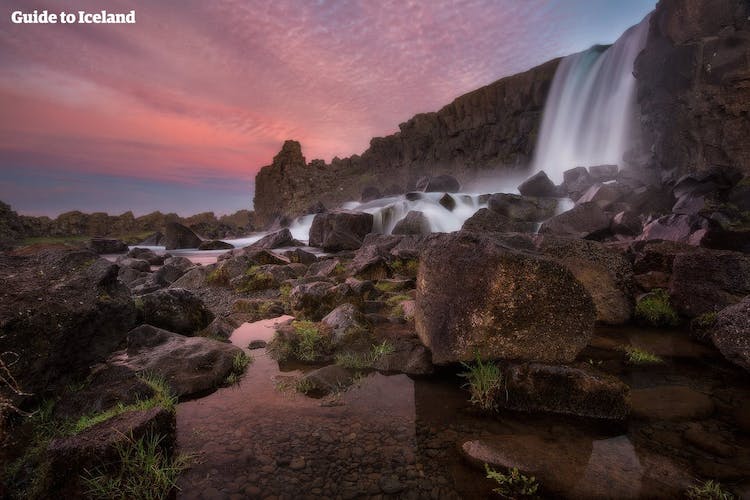 The largest attraction of the Golden Circle is Þingvellir National Park. The Icelandic parliament was founded here in 930 and remained until the year 1798 before moving to Reykjavík, making it the original site of what is now the world’s longest ongoing parliament.

Today it is a UNESCO World Heritage Site and one of the most important places to visit in Iceland. This is not just for its historical and cultural values, but for also its magnificent landscape and dramatic geology.

Þingvellir is surrounded by a beautiful mountain and volcanic ranges, as it is located in a rift valley directly between the North American and Eurasian tectonic plates. This makes it one of the few places in the world where you can walk between the continents, in the Mid-Atlantic Rift.

The daring and qualified even have opportunities to snorkel or scuba dive in this no-mans-land, in a ravine filled with crystal-clear spring water called Silfra. The visibility here can exceed 100 metres (328 feet), revealing incredible geological sites. Though it never freezes over due to the constant flow of water into it, it is 2°C (35°C) throughout the year, thus underwater explorers are always equipped with protective suits.

Other sites of note are the magnificent Almannagjá gorge, which you can walk down into to reach the rift valley from the North American tectonic plate, and the beautiful lake Þingvallavatn, the largest lake in Iceland, which gleams to the south of the National Park.

Due to its convenient location in south-west Iceland, it is easy to visit the Golden Circle alongside with many other sites. Those seeking relaxation could head to the Secret Lagoon in Flúðir or Fontana Spa in Laugarvatn, those seeking adventure could book a trip to the ice tunnels of Langjökull glacier, and those seeking culture could visit the Sólheimar ecovillage. For more natural beauty, you can visit the nearby Kerið crater lake.

There are many tours that include such bonuses, but if driving yourself, you should check out this guide to great detours off the Golden Circle.