Landmannalaugar, or the 'People's Pools', is a vast area of stunning and unique beauty in the heart of Iceland's southern Highlands. Throughout the summer, it is one of the most popular places for hiking -- either over one day or several -- and natural hot spring bathing.

Landmannalaugar is a truly rare area, both geologically and aesthetically. The dramatic region can be found nestled beside the raven-black Laugahraun lava field, a sweeping expanse of dried magma which originally formed in an eruption in 1477.

Landmannalaugar itself is made up of windswept rhyolite mountains, a rock type that creates a full spectrum of dazzling colour. Shades of red, pink, green, blue and golden yellow make for an ethereal location.

Landmannalaugar was historically best known for its natural geothermal baths, hence its name the People's Pools. For centuries, it served as an area of shelter and respite for weary travellers who use these soothing springs as a means to relax after tiring excursions.

Originally, those attending were settlers crossing the barren highlands, but today, they are tourists after an exciting trip.

Today, visitors to the Highlands should always bring a swimsuit and towel, just in case one of these naturally occurring hot pools should crop up along the hiking trail.

The most popular road leading to Landmannalaugar, Sigölduleið, has such springs, and takes you past multiple stunning natural features, including Bláhylur lake, a magnificent body of water nestled in a dormant volcanic crater. 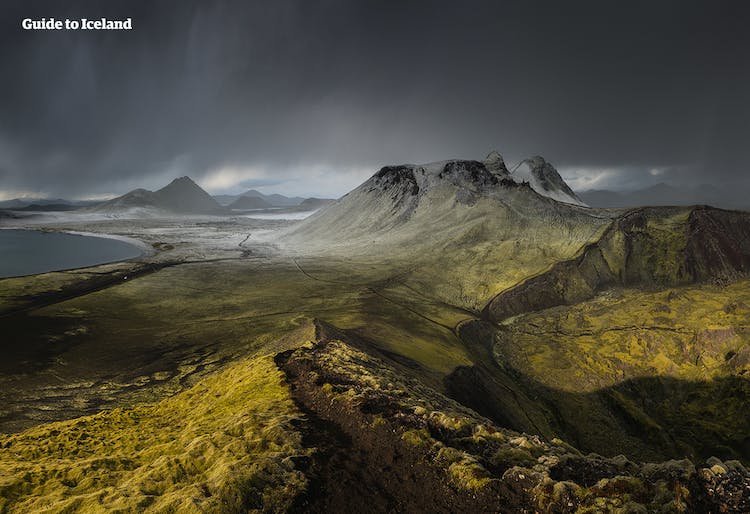 Landmannalaugar can be reached by car in one of two ways. The quickest is driving through West Iceland, either via Selfoss or Þingvellir National Park. A longer but more scenic route would take you along the South Coast of Iceland. This is Iceland’s most popular sightseeing route, aside from the Golden Circle, due to its wealth of sites.

Of course, like many of Iceland’s destinations, Landmannalaugar can also be reached via helicopter, for those who are travelling with less of a concern for budget. Those on more of a shoestring can buy a bus pass that will take them to the region.

Landmannalaugar marks the northern end of the Laugavegur, one of Iceland's most popular hiking trails. This route connects Landmannalaugar and Þórsmörk, the ‘Valley of Thor’, ending at the beautiful Skógafoss waterfall.

It is also home to many other notable trails, however, including the path onto the mighty Mt. Brennisteinsalda, the ‘Sulphur Wave’ crater. Visitors can also traverse the trail up the Bláhnjúkur volcano, the 'Blue Peak', whose summit allows for a sweeping view of up to five glaciers on clear days.

Multiple operators run daily tours to Landmannalaugar from mid-June to mid-September, during which time the Icelandic Touring Association operates a small shop, three campsites and a mountain hut equipped with sleeping bags and accommodation for up to 80 visitors.

It is only recommended you take a multi-day hike with an operator. If visiting Landmannalaugar without a guide, you will need a four-wheel-drive.